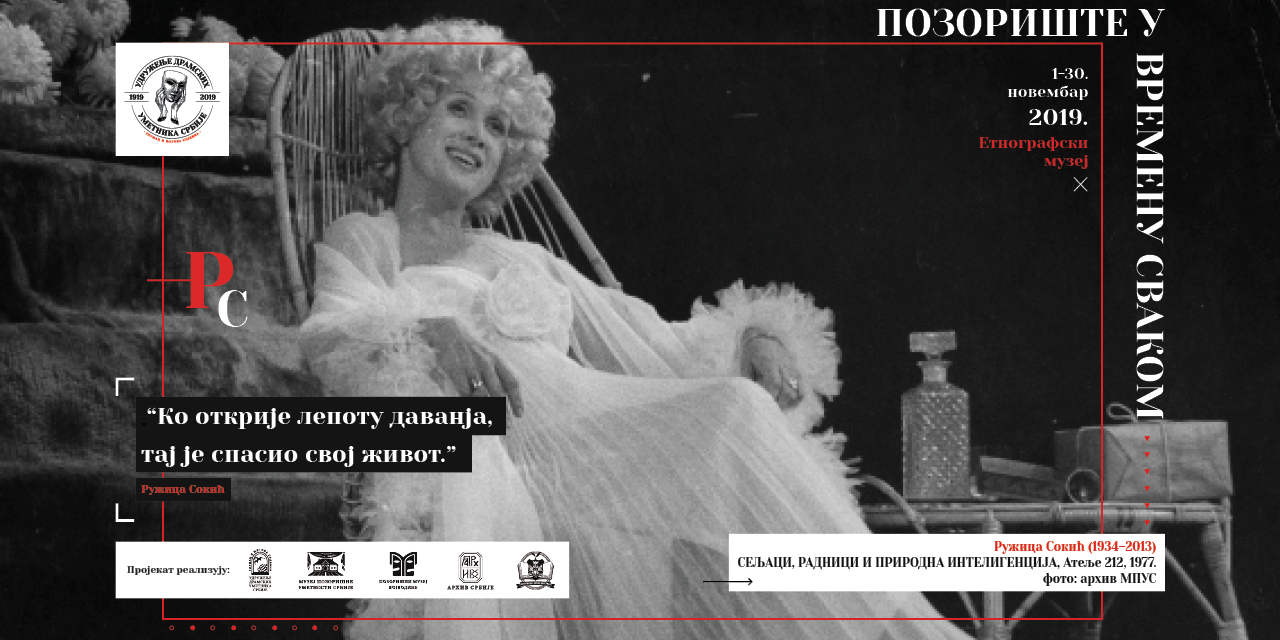 “Orange Studio”, marketing agency from Belgrade, together with the company “Alma Quattro” has successfully ran the marketing campaign marking the centenary of Association of Dramatic Arts of Serbia (UDUS).

Year 2019 is the year of centenary celebrations of the foundation of Association of Dramatic Arts of Serbia (UDUS) Orange Studio and Alma Quattro saw this anniversary as a very important date in the history of arts in Serbia and decided to support UDUS it with a strong media campaign for an arts exhibition “Theatre in Time Every” at the Ethnographical Museum in Belgrade in November 2019 so the information about the exhibit would reach as many visitors as possible, increase the number of people seeing the exhibits and introducing people who have marked the first century of UDUS to new audiences.

“We are very excited to be the part of the “Outdoor Exhibition”. The call from Mr. Voja Brajović, the president of UDUS we have received happily and we have worked together to make sure the exhibition leaves the usual closed grounds and reach as many people as possible. Therefore, the exhibit will be open to general public not only in the Ethnographical Museum, but also across our out of home media network on billboards, city lights and large LCD screens in Belgrade and Novi Sad. Orange Studio made sure the creatives for the campaign were also state of art using images of actors and actresses during plays across the century behind us with short messages that resonate in today’s world, also.”-stated Ms. Nataša Vuković from Alma Quattro.

“It was very clear from the get go that this was a big and important moment for our community. We had to show the general public the rich legacy of our Association and history of Serbian theatre in a single campaign. With the support of Alma Quattro, company always open for non-profit projects of interest to general public we have created and executed “Outdoor Exhibit” campaign that allowed the milestone moments, great artists and great art pieces be shown across Belgrade and Novi Sad. We hope these creative solutions will successfully represent the UDUS’ anniversary and that it will remain one the pillars of Serbian culture”-added Mr. Nebojša Babić from Orange Studio.

The campaign has primarily focused on award winners of “Dobričin ring“, those who are no longer amongst us: Ljuba Tadić, Mata Milošević, Dobrica Milutinović, Rahaela Ferari, Predrag Ejdus, Branko Pleša, Nebojša Glogovac, but there is also Jovan Sterija Popović to tell us that „theatre is the cure for illness of morale”, as well as Nušić to make us laugh: “In any case, it is better to watch life in a theatre, that theatre in real life” or Mira Trailović to explain: “It is not enough to love the theatre. The verb to love is actually not the right one. To serve the theatre one unselfishly must.”

Orange Studio has also left its recognizable stamp in this campaign, like it has previously also had with remarkable campaigns in Belgrade, especially with the project “Don’t believe in horoscopes. Believe in artists”, made up of arts of domestic artists taken out of classical exhibition spaces and present to a wide audience. “Works of Magical Čiča from Ripo (Dragan Radović), having his thoughts and wisdoms which make us contemplate life have also been shown on billboards across the city. In the space that is usually not their own these messages have gotten a whole new life.”-stated Nebojša Babić.

Just as a quick reminder, Orange Studio is a marketing agency that exists for more than 20 years. It was founded and is being run by the Belgrade artist Nebojša Babić. Primary business of the agency are marketing activities for numerous commercial clients such as NIS, Bambi, Nectar, Red Bull and many others. Orange is also renowned for socially responsible campaigns and thanks to the connection with the art world and various different activists, above all else through the project O3One, which has been in existence for 15 years, the studio has a very rich experience in art and humanitarian events, together with institutions of culture and humanitarian organizations. Major campaigns were for Kolarčeva Foundation, Belgrade Philharmonics, and many others. Campaigns for Tirš Children’s Hospital and National organization for rare diseases (NORBS) are also examples of project which goals are to improve the living standards in Serbia.

Alma Quattro is the leading out of home media provider in Serbia and it is celebrating its 25th anniversary of successful business. Besides airing different commercial messages to consumers, their media are important way of communicating different humanitarian, cultural and social projects. Each year, space permitting, Alma Quattro supports many different non-profit groups, organizations and institutions which promote affirmative actions initiatives and makes sure it truly is a socially responsible company that promotes social values and informs the general public.

Due to the fact that outdoor campaigns are visible 24 hours a day which makes them impossible to be overlooked, we believe that the “Outdoor Exhibition” will be noticed throughout the cities and that it will help preserve the dramatic arts is the conclusion of Nataša Vuković from Alma Quattro for Ludus.